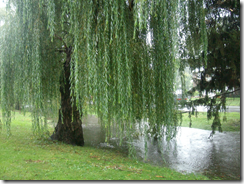 That’s the name of my next CD/Release.  “For the Willow wept…”.

[Update 06/14/2012: All songs referenced here are now reduced to samples in preparation for final release!!!]

Don’t know that I want to call it a CD though, because I’m not sure that I’m going to even release physical media this time.  CD Baby does just a fine enough job on releasing a digital only release, and with the fidelity you get on the various music related sites it gets sent to (iTunes, Amazon, etc, etc) I’m not sure it’s worth the effort to actually produce physical media.

But I’ll leave that to you? Would you be interested in a physical “CD” copy of my next release?

Regardless, I’m damn near close to being done.

Tonight I sat down with the specific purpose of writing a song for someone, and I’ll be damned if I didn’t have it “done” after only 2 passes through it.

Without saying too much, this tune has special meaning, and a hidden message in the title

So please go check out “For the Willow weeps underneath the Stormy skies” and let me know your thoughts? I’m extremely happy with how it turned out, with so much ease.

I’ve also acquired an artist whom I want to do the cover artwork for this release, rather than producing my own.  I think they have an amazing amount of talent, and would like to showcase their work on this release.

The only tune that actually NEEDS attention now is Over the Horizon. I’m just still not sure where to take it, and quite honestly, I may decide to split it into two separate tunes.  I had hoped to mesh the two distinct sections of it into one long set, but it just doesn’t seem to be working.  Who knows, this weekend may prove different.

So, without further ado, the entire track listing for For the Willow wept… (as it stands now) will be as follows:

[Update 06/14/2012: All songs referenced here are now reduced to samples in preparation for final release!!!]

Yes, these are links to the full versions of these songs.  You may be asking why the hell would I just be giving them away for free right now, but I decided long ago, that while things are a WIP (Work in Progress) I would share freely for feedback; constructive criticism; etc. Trust me though, when the release is set in stone, they will no longer be free, and the official versions may or may not be what I present to you here.

So, give them a listen through in order and let me know what you think!  Especially For the Willow weeps… as I’d love to get some direct feedback soon on this one.