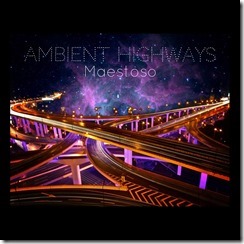 Work on my next project "Ambient Highways" is starting to really come together.

If you haven’t listen to the entire set yet, I encourage you to do so via the link to the playlist on SoundCloud in this posting as I have made adjustments here and there.

Throughout this week I have:…

Based on feedback, it looks like I may still leave the title of this release as "Ambient Highways". All though not a pure ambient release as I initially thought, the songs have come together nicely enough that I think they all fit well together enough to include in a single album.

I have also adjusted the playlist a bit based on listens and feedback. The current stand out tracks so far seem to be Neutrino, V Feeling and Ambient Highways.

At this point, I have just at 50 minutes of music which is certainly enough for a full album, but there may be one more song I add over the next couple of days.

Once that is complete, it’s time to turn on super scrutiny mode and make any final adjustments after listening to everything yet again all the way through, many many times.

As I’ve noted before, I’m going to go back to physical releases. Just like a book, there is nothing like having that physical product in your hand, even if it does just get ripped to your music player, and then set in a box. With that in mind, I’m planning on a limited series of autographed copies (More news to follow on that).

Therefore work on the artwork and liner details will commence over the next couple of weeks. I want to include enough liner material to make it worth your while to have the physical version in your possession.

So, give it a listen all the way through and let me know your thoughts!

Thank you for your support!