Just a quick note to tell you that the Bundle of Stichs edition of Mister Stichs is now released! 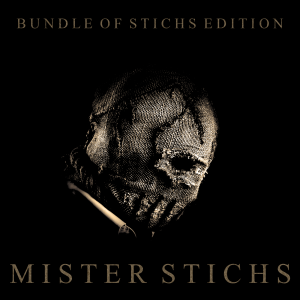 The Mister Stichs – Bundle of Stichs Edition includes both the Mister Stichs and March of the Inanimate – Reppossessed Original ‘N’otion Picture Soundtracks by Keith Richie, plus 3 additional bonus tracks and other bonus items not found in either soundtrack alone.

The bonus tracks for this edition at titled:

If you have been waiting on the bundle edition to release, well now is your chance to claim it by just visiting the Bandcamp page by clicking right here and ordering your copy!  If you are a subscriber to me on Bandcamp, well then it’s all ready for you to download!

“When a family moves from their home in Downey, California to a rustic country house in Texas, they begin to feel an ominous presence pervading through the house and lands surrounding it.

After coming in contact with the darkness first hand, the family is thrust into a crucible of madness that sends them into a spiral of terror and threatens to tear them apart.

Can they thwart the unspeakable evil of their stalker? Or will the vengeance of Mister Stichs leave them splintered, and clawing for sanity?”

March of the Inanimate – Repossessed

“A man possessed by the desire to live searches an abandoned home for a lost treasure that could hold the key to the mystery of mastering death. However, when he finally finds what he is looking for, he uncovers a power far more sinister than he could have ever imagined.

As he tries to escape the entities that have come to devour his greed-laden soul, he finds himself unable to bear the weight of his own corrupted consciousness.

Can he find a way to shrug the burden of his sins? Or will he be destroyed by the creatures that march upon him with unseeing eyes?”

March of the Inanimate – Repossessed is the 2016 re-mastered and extended edition of the 2014 album March of the Inanimate. It pays homage to the classic horror movie soundtracks produced by John Carpenter and Alan Howarth who co-wrote the music to classics such as Halloween, the Fog, and numerous others.

This 2016 version includes 3 additional tracks crafted within re-mastered versions of the original audio story to enhance the listening experience.

“Slowly building, this opus-magnum incorporates some very haunting piano-melody and an increased intensity in the dark-electro, pulsing rhythms. Again…considering the subject matter he’s based this music on – this fits right in there, right into the gritty underworld of horror-movie-mania; “March Of The Inanimate” is musically-menacing to say the very least.” – Jer@SBS/Sleeping Bag Studios

“Keith Richie has a way with electronic music. It almost always never sounds electronic! Here, he has the freedom to explore the aural landscape and generate musical imagery, beyond the limits of pop music structures, and he does it extremely well. He produces a unique listening experience, a collection of suspenseful, expressive themes that are also occasionally inspiring. “March of the Inanimate” feels like an invitation to imagine movie scenes from films that have yet to be made” – Robbie Tee / Jamsphere

I hope you enjoy!